Indecent is a beautiful, heavy-going drama 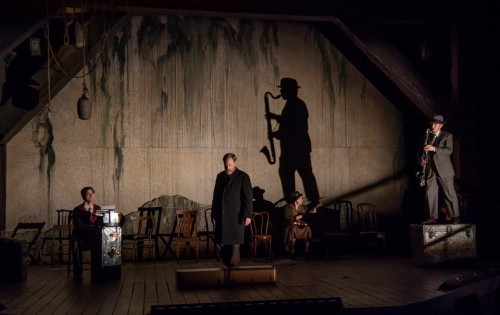 Indecent is a beautiful, heavy-going drama. Paula Vogel’s play, she of How I Learned to Drive and The Baltimore Waltz, among other works, tackles censorship, homophobia and antisemitism in an utterly seductive manner. It’s themes are serious-to-downright-grim, but it’s mesmerizing. The Max and Louie production of it at the Grandel gives it all they’ve got and does it proud.

It’s based on real events in the life of Sholem Asch, a Polish writer. His 1906 play The God of Vengeance was performed with considerable success all over Europe, and then came to the United States. And therein lies the rub. The play was about a Jewish man who ran a brothel and whose daughter became involved in an affair with one of his prostitutes. In his anger, he throws the Torah to the ground. Not only sexual scandal, but blasphemy as well – but the play continued to be performed even during World War I. From the inception, though, the play included an onstage kiss between the two women. In 1922, an English translation was created and it opened at the Provincetown Playhouse and subsequently in Yiddish, the play’s original language, at what we’d now call off-Broadway. In early 1923, it moved to a Broadway house, in English, with a story line somewhat altered. Within a few weeks the entire cast and the New York producer were all arrested for obscenity. They were convicted, although that was overturned on appeal, and the play’s lifespan did not end.

Indecent is about both Sholem Asch and the play, using a cast of seven, plus three on-stage musicians. Lemml, the stage manager, is a warm and utterly charming TJ Lancaster. He leads us through much of the action. The rest of the actors are multiple characters – here I’m identifying them mostly by their primary role. Paul Cereghino plays Avram for much of the play, a man who believes in beauty and art and a realistic portrayal of Jews in theater. The aging Asch is John Flak, but most of his time is spent playing the actor who’s the father running the brothel, and he’s particularly notable as that, throwing down the Torah to illustrate his anger. His daughter, Zoe Farmingdale, and Katie Karel as the girl downstairs, are wonderfully tender in their roles. Judi Mann is the mother, almost tearing her hair out at the scandal of it all, and Tim Schall is notable in several roles, including the Broadway producer.

Joanne Gordon directs this tightly-paced show with all its emotions. Besides the impact of the words and the sound of the band with its klezmer music, there’s also an immense visual contribution. Dunsi Dai’s set and Patrick Huber’s complicated lighting are as much a part of things as the words and music. It’s a surprisingly gorgeous setup, even with the quiet clothing of the eras, courtesy of Teresa Doggett. (Although there is that one costume for John Flack….)