By Tina Farmer – KDHX, December 29, 2017
‘Souvenir’ is a brilliant work of showmanship, missed notes, and an enduring if odd friendship.

By Richard T. Green – Talkin Broadway, December 18, 2017
Marie Antoinette is supposed to have said, “let them eat cake,” as French peasants grew angry at her profligacy. Likewise, in a moment of imagined noblesse oblige, in our own Great Depression, Manhattan millionaire Florence Foster Jenkins very nearly said, “let them hear me sing.”

By Pamela Reckamp – STL Limelight, December 18, 2017
So Much to Love in Max and Louie’s Souvenir.

“A beguiling comic jewel with a heart.” – Variety

“…a memorable illustration of the real limits of self-perception,and of the purely theatrical magic that can turn the tinniest ear to gold.” – Time Out

“..so go laugh to your heart’s content.There weren’t many voices as bad as Jenkins’.There aren’t many theatrical experiences as good as Souvenir.” – Boston Globe

Dubbed by her critics as the “Dire Diva of Din”, passionate music lover and wealthy socialite, Florence Foster Jenkins enjoyed a remarkably successful concert career even though she was unburdened by talent and deliriously tone deaf.

Her story is told through the eyes of her pianist, Cosme McMoon. A truely talented musician, he regards her at first as a little more then an easy way to pay the rent, but his initial contempt gives way to reluctant admiration, then friendship and a unique kind of love.

Their bizarre partnership yielded off-key recitals that earned them standing ovations and cultish fame-culminating in a sold-out performance at Carnegie Hall.

Get to know this epic musical odd-couple in “Souvenir”, a tuneful comedy which beguiles the hopeful artist that lives in us all. 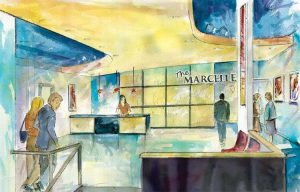 The Marcelle Theatre in Grand Center is located 3 blocks East of Grand Boulevard, just down the street from Powell Hall, and offers free lighted parking across the street.