Max & Louie’s powerful ‘Indecent’ is in tune with the times 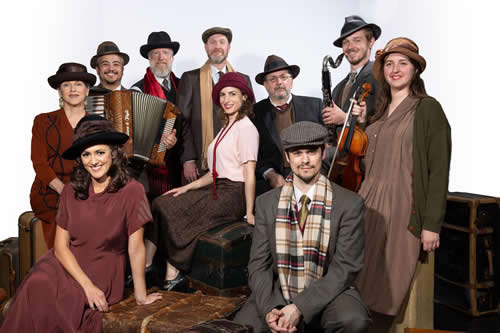 In the early 20th century, a play called “God of Vengeance” toured Europe to great success. A scene in which two young women shared a passionate kiss was accepted as part of life. But in America, that tender interlude prompted the arrest of the entire cast on charges of obscenity.

The controversy surrounding Polish-Jewish playwright Sholem Asch’s uncompromising drama is the inspiration for “Indecent,” a thrilling and poignant Max & Louie production. Written by Paula Vogel (“How I Learned to Drive”) and directed by Joanne Gordon, the play with music is wonderfully acted, imaginatively staged and excitingly of the moment.

As a budding playwright, Asch (Paul Cereghino) is proud of “God of Vengeance” and its multifaceted portrayal of Jewish life. But he faces opposition from Jewish elders who condemn aspects of the play as anti-Semitic and denounce its depiction of a lesbian romance.

Nonetheless, Asch perseveres with the support of his wife, Madje (Zoe Farmingdale), and a tailor named Lemml (TJ Lancaster) who assumes the role of stage manager. Indeed, the play will prove to be life-changing for Lemml, who continues to stand by it in the most dispiriting of circumstances even as Asch’s worldview darkens.

Vogel’s characters and situations come vividly to life, and Gordon conjures a richly theatrical experience. The excellent ensemble includes seven actors and three musicians, with most of the actors gracefully taking on multiple roles and the musicians meshing seamlessly with the narrative.

Lancaster persuasively captures Lemml’s evolution from neophyte to old hand. And Katie Karel is impressive as an actress who believes in the beauty of “God of Vengeance” but is dismayed by changes imposed on its script.

“Indecent” is a tribute to the power of theater and a show that demands to be seen.