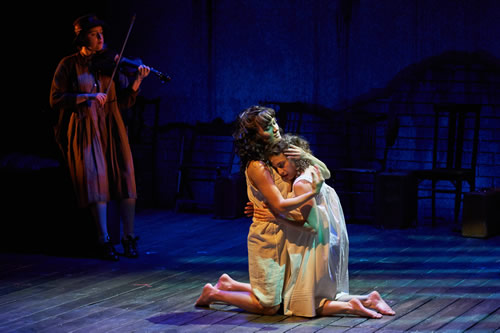 Is the theater a window, or a mirror?

One doesn’t obviate the other, of course, and both offer special satisfactions (sometimes simultaneously).

But nowadays, when we are acutely aware of theater as a vehicle to present ethnic and cultural groups, Paula Vogel’s haunting drama “Indecent” compels us to ask: Who is this for?

Jews. Above all, this play by a brilliant Jewish writer is for the Jewish audience.

Or the queer community. This play by a brilliant lesbian writer is for the LGBTQ audience.

Eloquent and poignant, historical and imaginative, “Indecent” is probably for anyone who loves theater. Or who has the ability to step into someone else’s shoes.

But that comes close to making the drama sound like an anodyne salute to humanity, which is absolutely not what Paula Vogel has written. She has made a deliberate, passionate choice to tell a story drenched in her own heritage, a salute to a world that was murdered while it still bloomed. Max & Louie Productions gives the play its St. Louis debut, running through June 30 at the Grandel.

“Indecent” traces the story of another play, “God of Vengeance” by Sholem Asch. A young author caught up in the Yiddish Renaissance of the early 20th century, Asch brought to the Warsaw stage a harrowing story of prostitution, hypocrisy and the love between two young women. It was a huge hit, a must-see show that won acclaim throughout Europe.

When it came to New York in 1923, however, “God of Vengeance” ran into big trouble. The Jewish establishment hated it because some of its Jewish characters did terrible things. The police and blue-noses hated it because they considered it pornographic; in the play’s crucial “rain scene,” the women kiss.

Driven from the New York stage, many of the performers returned to Poland. They were headed in a tragically wrong direction. Although Asch and his family were safe in Connecticut, the Holocaust stained the rest of his life with smoke and blood.

Under the direction of Joanne Gordon, this supple production takes us through the journey of “God of Vengeance,” from the young writer’s joy in showing his script to his bride to the elderly Asch’s furious refusal to discuss its latest translation.

The onstage instrumentalists – Alyssa Avery, Kris Pineda and Jack Theiling – amplify the sense of a densely populated world. Farmingdale, as a young Yiddish theater actress struggling with English, is especially touching, and Lancaster, in his sole role as the stage manager, plays smart and subtle homage to the same character in another play, “Our Town” (which might be read as the story of a New England shtetl).

We need those guideposts. As director Gordon hurls us through time and space, we’re always on the move, experiencing everything from a ramshackle (but thrilling!) backstage corner to a fashionable New York synagogue to a secret attic theater in the Lodz ghetto. There, the “rain scene” is at last performed, transcending terrible circumstance with its other-worldly beauty.

The projections, by Kevin Bowman, are much more than a trendy trick. Words often appear on the back wall in both English and Yiddish, which sounds a lot like German but is written with Hebrew letters.

Just as the rain sets the lovers apart from everybody else on stage, the visual contrast between the two alphabets illuminates two different worlds, one of which all but destroyed the other. The most stunning phrase, which is projected repeatedly in different contexts, simply reads “An impossibly long line.”

I don’t know how to say that in Yiddish. But after experiencing Vogel’s heartrending drama, I wonder if maybe I do.