One of the top stage achievements this summer has to be the production of the two-act play, “It Had to be You,” now on board at the Marvin and Harleen Wool Theater at the JCCA. With great comic gusto, Stellie Siteman’s and Jerry Vogel’s characters grow as they embrace the audience, who seemed to be oblivious to the sound of the thunder storm and torrents of rain slamming against the theater’s roof. The chemistry of the two is irresistibly funny.

Their characters are specific, individual and isolated types, but active symbols of mankind in general, with mankind’s virtues and faults, gropings and findings and finally – triumphs and doomed defeats. The two actors’ honest realism, portrayed amidst a sparse set, is a revelation to a stage chiefly given over, at its serious best, to rhinestone imagination. One member of the audience suggested, after the final bows, that the entire production should be sent on a road tour.

The play, from the pens of Renee Taylor and Joseph Bologna, is directed by Sydnie Grosberg Ronga and is slated to run throughout the week. Swelegant members of the audience included: Dr. John Elena; Lenore and Ed Pepper and glamorous Bettie Johnson, who proves that background is never discussed – it’s reflected. 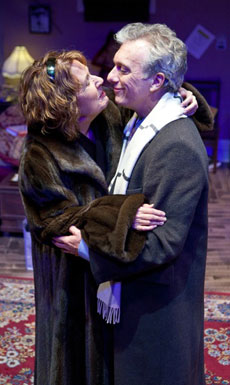