These producers sniff out comedy!

The latest troupe on the St. Louis theater scene, Max & Louie Productions, takes its name from a pair of newcomers. These two turn out to be exceptionally cute (especially by the standards of theatrical producers. Think of David Merrick. Would you want him to sit in your lap?)

The bichons frises make their home with Stellie Siteman, the company’s artistic director, and De Kaplan, the managing director. Max & Louie’s first show, the romantic comedy “It Had To Be You” with Siteman and Jerry Vogel, plays through July 30 at the Wool Theater at the JCC, 2 Millstone Campus drive.

Next up: “The Lady with All the Answers,” a one-woman show in which Siteman will portray advice columnist Ann Landers. It will play in April at the Missouri History Musuem. 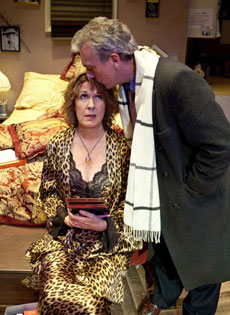