Most of us remember the gloomy assessment from the mid-1980s: that a woman, then in her mid-30s, was more likely to be killed by terrorists than get married for the first time. But what if such a woman turned the tables and became (at least comically) the terrorist, herself, to get her man? More on that in a minute.

I have some mixed feelings about the script for this one, which rarely fulfills its comic potential, but you have to admire the way that Stellie Siteman as Theda and Jerry Vogel as Vito make it all worthwhile. She comes on in a rush, late for an audition (for what, she knows not), then comically rattles on and on about her life, charming the producer of a TV commercial (Mr. Vogel). Flash-forward to her apartment, where the fun and games begin in the 1980 script by Renee Taylor and Joseph Bologna. And because Ms. Siteman and Mr. Vogel offer up such intensely felt and detailed characters, with the guidance of director Sydnie Grosberg Ronga, even this somewhat predictable romantic comedy takes flight. Though it may seem as improbable as a box-kite till it’s finally thrust aloft.

We might do well to forget the topic of “romantic comedy” altogether and just say It Had to Be You is really about the headlong rush of middle-aged men and women who may not realize they’re running out of time for a serious romance, full of discovery and adventure. It’s then that we can begin to see how hard it may be for these two to eventually get their affair in order.

Two key moments in Ms. Siteman’s performance leap to mind, helping to make this show special: that scene in the beginning, where she’s trying to get through an audition; and two hours later, after every flaw is laid bare. It’s then that she’s astonishingly vulnerable, yet somehow perfectly mystical: silently pitying Mr. Vogel’s character as he stands at his own crossroads, for a change. In the end, they make lemonade out of some of life’s bitterest fruit, and put a romantic glow on some very tense, primal emotions. 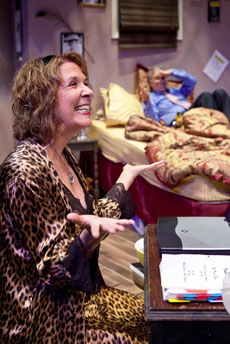 In between, though, there’s that aforementioned “terrorism” angle, where the middle-aged Theda seemingly entraps, poisons and tortures Vito on the road to matrimony in the Golden Years. And, don’t get me wrong, he may deserve all that mistreatment: he’s a cynical womanizer and estranged from his own child. It’s these sorts of glaring personal flaws that help us through the standard formula. Needless to say, it takes a special pair of actors to find the charm and satire here. Fortunately, Ms. Siteman is a remarkable comic talent, and Mr. Vogel is in continuous demand as a (usually) serious actor.

During intermission, though, an older lady got up and left. She apologized to her friends, saying it just wasn’t her type of play. And from this, I extrapolate that there may be a problem here for certain audience members (myself included, though in a much smaller way): Ms. Siteman’s realization of Theda, as a human being, is funny, but also strangely disturbing, as one of those women who is just barely staying afloat, with no visible means of support, against impossible odds (like a Jewish Blanche DuBois). And it’s palpably unnerving, the idea that a grown woman so seemingly hopeless might never get her act together or pull herself out of her own personal ditch, much less make something out of her life. But if that lady in the audience had stayed, she might have become convinced (like me) that each of us probably has at least one foot in that same ditch. And that people like Theda may be more than usually qualified to offer a free hand, to pull someone else up along with them.