An Iliad and an Oddity: Mrs. Mannerly’s quietly funny, An Iliad’s loudly not.

“Welcome to Mrs. Mannerly’s School of Manners!” With this single embracing sentence, we are admitted entrance into a refined world of courtesy and decorum. On surface the second-floor rumpus room at the Steubenville, Ohio, YMCA is hardly an elegant locale. But back in 1967, when ten-year-old Jeffrey Hatcher was a wide-eyed, bow-tied student, Mrs. Mannerly’s eight-week etiquette class transformed the Y into a magical place, a genteel bastion that sought to hold back the tide of an increasingly strident world. Mrs. Mannerly, which is enjoying an aptly charming staging at Max & Louie Productions, is Hatcher’s delightful yet melancholy valentine to lost innocence. 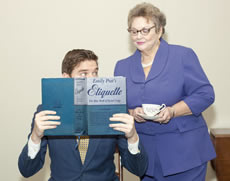 After Hatcher left Steubenville, he grew up to become a prolific playwright (Tuesdays with Morrie, Ella, Compleat Female Stage Beauty). But by the time his scripts began to be produced, large-cast plays were as extinct as etiquette classes. Mrs. Mannerly is in the same “child falls under spell of charismatic grande dame” genre as Auntie Mame. But whereas that 1956 comedy sports a cast of thirty, Mrs. Mannerly must make do with a company of two. Donna Weinsting enacts the title role with a sweet dab of quiet desperation; the ingenuous Charlie Ingram portrays Jeffrey and everyone else.

Director David Hemsley Caldwell aims for chuckles rather than guffaws. (Mrs. Mannerly would not have approved of crass laughter. One of her staples of sage wisdom: “Don’t draw attention to yourself.”) And there are layers here beyond mere jokes. Mystery, for instance, as when (rather like in Agatha Christie’s Ten Little Indians) one by one the students begin to vanish from the class. There’s even violence afoot: One student tries to scoop another to death with a melon baller. (You don’t see that in Auntie Mame.) We can assume that with the passing years, Hatcher’s memories have grown exaggerated. But he keeps the 70-minute evening compact. For delivering such a tidy and deft vignette, surely Mrs. Mannerly would award her prize pupil extra points.