Story: Jeffrey is 10 years old and a bit too headstrong for his parents’ liking. So, they enroll him in Mrs. Helen Kirk’s manners class at their local YMCA in Steubenville, Ohio. It’s 1967, so Jeffrey and the other students in “Mrs. Mannerly’s” class dress in spiffy fashion which, after all, is part of being properly groomed and presented.

Jeffrey isn’t too happy about being in the class, which he says is like “being in church, but not bored.” When he learns that Mrs. Mannerly has never given a perfect 100 percent score to any student in her 30 years of teaching etiquette, he decides to throw himself into his p’s and q’s and earn that elusive designation. Along the way, though, he learns about Mrs. Mannerly as well as himself.

Highlights: Playwright Jeffrey Hatcher is a prolific sort, cranking out all sorts of comedies, dramas and musicals, ranging from the clever A Picasso to the maudlin Tuesdays with Morrie and much in between, even his own offbeat stage version of Dr. Jekyll and Mr. Hyde. 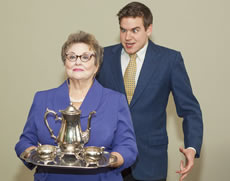 This one-act comedy debuted in New York in 2010 and is given its St. Louis premiere in a smart and stylish show directed with flair by David Hemsley Caldwell that features winning performances by Donna Weinsting in the title role and Charlie Ingram as Jeffrey and others.

Other Info: Hatcher has an engaging way with dialogue, but even so his 90-minute, somewhat autobiographical story (note the amusing photo in the program) wears thin in the final half hour. Still, there’s enough interest created in the mysterious background of Mrs. Mannerly that an actress of the high caliber of Weinsting can cultivate into a memorable presentation.

She also displays her fine dramatic skills in a poignant scene at a local bar where Mrs. Mannerly lets down her guard recalling a melancholy moment from her past, which she subsequently dismisses with strength of character that surprises the impudent but impressionable Jeffrey.

As the young upstart, Charlie Ingram is best when revealing the inner workings of Jeffrey’s warped young mind, less so when portraying other students in the class, particularly the girls.

The direct scenes between the two main characters, though, are beautifully layered and handsomely delivered, both by the performers and by the astute guidance of director Caldwell, who essayed the perceptive notes about the play at the front of the program.

The set designed by Christopher Waller simply conveys the Spartan meeting room used by Mrs. Mannerly in the YMCA, whose emblem Waller includes at the top and middle of his design. Wendy Renee Greenwood’s props do much to enhance the proceedings, including a table setting that provides key comic moments, and Maureen Berry lights everything with an impish touch. Amanda Were’s sound design of pop tunes plants us squarely in the middle ‘60s.

The juvenile (as opposed to sophomoric) humor of young Jeffrey propels this pleasant little excursion into nostalgia. It’s the unexpected poignancy of the relationship between teacher and student, though, that gives Mrs. Mannerly the respect it properly deserves.