Mannerly gets a perfect grade at charm school!

Every boy of ten needs a Mrs. Mannerly — a much older woman to show him the ways of the world. Now, I’m not talking about a Mrs. Robinson, oh, no (though that, of course, is always nice). No, I mean someone who will teach the lad proper customs and behavior that will allow him to pass smoothly into adult society. When I was ten I was blessed with the occasional visits of my aunt Eleanor—an elderly widow whose very presence commanded respect. She took it as her duty to instruct her many nieces and nephews in decorum: a gentleman opens doors for a lady, holds her chair at table, lights her cigarette; when walking on a sidewalk with a lady he always takes the outside; indoors he removes his hat—plus the many, many et ceteras concerning table manners. 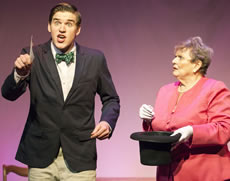 (Of course any civilized person should be able to lay a place setting with fiver or more utensils!) Aunt Eleanor was, if you will, my Judith Martin. I have long accepted that men who fail to observe these myriad little dicta do so not out of malice or even boorishness, but out of simple ignorance and neglect: nobody cared enough about them at a tender age to take the trouble to instruct them in these “ways of the world”.

Max & Louie Productions has opened “Mrs. Mannerly”, a delicious and totally charming little gem of a show. It’s set in 1967 in “Mrs. Mannerly’s Manners Class” in Steubenville, Ohio. The class has been a town institution for decades. Young Jeffrey isn’t good at much (he knows he’d be a total loss in Little League), but everybody says he’s “well-behaved”, so he’s eager to enroll in this class, where he’s sure he’ll be able to sweep all the top honors.

Donna Weinsting plays the title role, and it’s another in her long string of truly fine performances. She can be a very funny lady, but she also has the gifts of warmth, subtlety, poignancy, even pathos when these are called for. As the slightly mysterious Mrs. Mannerly she has occasion to show them all.

Her partner in this coming-of-age confection is Charlie Ingram—a very talented and versatile young actor indeed. Ingram plays not only young Jeffrey but also all of the class-mates he’s competing with, as well as a few adults. (I was reminded of last year’s lovely “Travels with my Aunt” where a handful of male actors each played many roles.) In such a situation, of course, we must make do with mere cartoon sketches of some of the characters, but playwright Jeffrey Hatcher draws them concisely with a sure hand and a keen memory of his childhood. And Charles Ingram plays them deftly. Together playwright and actor capture the essence of these iconic kids whom we all remember from grade-school: the goody-goody brown-noser who has all the right answers, the disgusting boy who refuses to use a handkerchief, the pouty little girl who simply hates us . . .

Early in his tutelage young Jeffrey finds there’s a mystery about Mrs. Mannerly. Why does the mention of Chicago make her so nervous? Surely there’s something dark in her past.

Mrs. Mannerly’s etiquette classes traditionally culminate in a presentation before a meeting of the D.A.R. where students compete in answering questions—and in a demonstration of ballroom dancing. In all the years no student has ever got !00% on the questions—but that’s just what Jeffrey is determined to do. And dancing? The only girl in class has dropped out, so Mrs. Mannerly recruits Patsy, a recent graduate of hers as Jeffrey’s partner. Patsy, it seems, has mastered not only the niceties of white-glove society, but also quite a bit of bare-knuckle street-smarts (and language).

There’s a lovely scene in a bar where Jeffrey and his teacher spend a while over drinks (his soft, hers not). It’s a revelatory and bonding experience.

All of this is done with great wit and charm. Finally, despite the many, many laughs, there’s a delicate denouement in which we find deep understanding, sympathy, wisdom and respect. Young Jeffrey has, in an important way, become a man, and we see Mrs. Mannerly moving on to further adventures.

“Auntie Mame” sweeps her young nephew, Patrick, into free-spirited chic bohemianism; Graham Greene’s “Aunt Augusta” instills courage for adventure in her timid not-so-young Henry. And Jeffrey Hatcher’s “Mrs. Mannerly” inducts her young student into the grace and wisdom that will serve him well in the grown-up world.

I can’t remember when I left a show feeling so good. “Mrs. Mannerly” plays at COCA through June 2.