As the lights come up and we drop in for a late night visit with Eppie (a spot-on Stellie Siteman), she’s sporting a red pantsuit and a bouffant to touch high heaven. She’s hesitantly approaching, then backing away from her typewriter. See, there’s some work she’s been putting off — described by her to be the “most difficult column of her career”. What better way to procrastinate than to engage with a few of her readers? Eppie jumps at the chance and reads to us from some of her favorite letters (she’s planning on putting together a book).

These first few letters she reads include some of her lighter fare — a woman who wonders whether or not it’s okay to do housework naked (I vote yes), and a woman whose husband embarrasses her by dressing up like Tarzan and dropping down from a tree onto unsuspecting guests. These early moments draw us in, and Siteman’s liveliness is hard to resist. Eppie tells us that she’s never claimed to be an expert on anything, but that she does have one hell of a Rolodex.

Her musings are interrupted a couple of times with phone calls from her family. These opportunities are used to share a little of her history with us, including the antagonistic relationship with her twin sister and rival, Pauline, “Popo”, who wrote the “Dear Abby” column. We also learn about her marriage to Jules Lederer, and the daughter she adored, Margo. 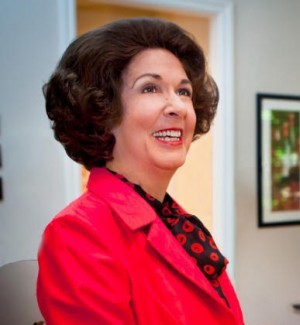 After an intermission for us, a bubble bath for her, and more anecdotes about (among other things) her appearance on television to discuss “Deep Throat” and a visit to Vietnam, she realizes that she can’t put off the task at hand any longer, and forces herself to finish the column she’s been dreading. After dispensing advice to the lovelorn, and expressing her belief that husbands and wives must try to soldier on in the face of hard times, she’s compelled to tell her readers that her marriage of 36 years has come to an end. Her husband Jules had fallen in love with a younger woman some three years earlier. We never really find out any more than that, only that she feels an obligation to her readers to admit that her own marriage has fallen apart.

Stellie Siteman really nails Ann Landers, down to that Chicago dialect, and she achieves a nice balance between blunt straightforwardness and good humor. She’s really fun to watch. Christopher M. Waller’s smartly designed set provides her with plenty of room to prance back and forth, and the lighting by Glenn Dunn seems to follow her moods and reminiscences.

Now, the play never really digs too deeply into the life of Eppie Lederer, her divorce, or her feud with her sister. These details are just kind of bypassed, but it’s still an engaging portrait. If you’re up for a nostalgic little charmer, this is the one.