I spent an evening with Anne Landers recently….at least I watched as an extraordinary actress brought La Landers back to life for a touching, rollicking jaunt through the life of an American original.

For more than four decades Ann Landers, advice columnist and political activist, ruled the printed word. Her column reached some 60 million readers. Her advice was funny, sometimes acerbic, sometimes tender but always right on target. She counted among her closest friends politicians, law makers, society denizens, writers, actors, and a President or two. She was one of the most influential and well known women in the world, yet she personally answered every single letter she received.

In the hands of the remarkable Stellie Siteman, Ann Landers is presented as an exciting, vibrant, courageous woman, a tiny dynamo filled with love and good humor, a woman who truly cared about people and their problems. Some of the scenes in this play could have been unbearably corny and Ms Landers could have been made into a tedious caricature; but thanks to Ms Siteman, a wonderful script by David Rambo, and deft direction by Sydnie Grosberg Ronga, it all came across as perfectly honest and true and I believed every word.

As Ann Landers, Siteman talks to the audience as if we are old friends come to help her through a difficult night. She reads to us from former columns, rocking with laughter at some story or other, then plunging into a narrative about her early life with her beloved Jules or the manufactured feud” with her twin sister, “Abby”, of “Dear Abby” fame.

We learn of a little-known visit she made to Viet Nam during the war. Wafting Chanel No. 5 (“it occurred to me that most of those boys hadn’t smelled nice perfume in a long time”), she talked to the wounded soldiers, comforted them, spoke to them of home and when she returned stateside, she personally called over six thousand families to assure them that their sons, husbands, brothers, fathers, friends were alive and doing okay. 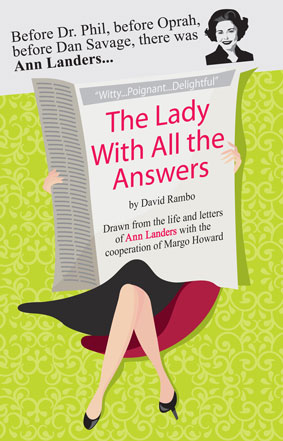 Finally Ann confides to us that the real reason behind her late night musings is her inability to find the words to write a letter to her fans telling them of her impending divorce from Jules, her husband of 36 years. Jules, it seems, has now moved on to greener pastures with a younger partner. “Never say ‘it can’t happen to me'” , she warns, “because it can and it does.”

Ms Siteman looks a lot like Ann Landers even without the trademark bouffant wig, but the physical resemblance aside, Ms Siteman moves like Landers, talks like her, and has Landers’ mannerisms including that indefinable warmth that Landers generated even in television appearances. Either Stellie Siteman channeled Anne Landers or she’s one of the best actresses I’ve ever come across. I think it’s a bit of both.