We critics have a secret, sliding scale we use to rate performances, but it seems quite suddenly out of date. It used to go something like this: 20 points possible for an actor’s transformation in the role; 20 points possible for wit and insight; 20 points possible for skill and stagecraft and the invisible art of manipulating an audience; and 20 points possible for originality. That’s 100, right? Well, nobody ever asked a critic to review the bookkeeping. But what do you do when an actor—or, in this case, an actress—scores 100 on each of these scales? All weights and measures become obsolete. You can’t tell them they scored 400% on the test, can you?

But so it is with Stellie Siteman, brilliant as advice columnist Ann Landers in the new production of The Lady With All the Answers. So complete is her transformation, from bouffant hair, lacquered up like a big 1960s helmet, to the subtle, iconic speech impediment, to the tart-tongued advice that somehow comes across as endearing and indelible, that all her other, past performances are cast to the deepest oceans of our memories. And thanks to director Sydnie Grosberg Ronga, Ms. Siteman becomes mesmerizing: telling the story of how she, as Ms. Landers (real name Eppie Lederer), developed the image of a woman who first focused the nation’s attention on the sexual revolution of the 1960s and ’70s, and drummed up support for the government’s largest health-care appropriation (after Medicare and Medicaid, I guess), and fearlessly used her position (with 60 million readers) to inveigh against the war in Viet Nam, to the consternation of President Johnson. 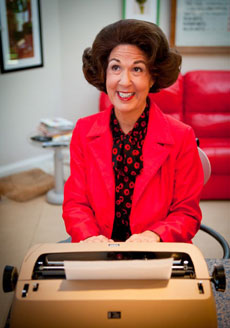 But the story, as scripted by David Rambo, also details the rise (and eventual fall) of her married life, in a way that Ms. Siteman makes unexpectedly poignant and deeply intimate, in spite of the larger-than-life performance that greets us in act one. The pending dissolution of her marriage threatens to make a fool out of Landers, after years of publicly opposing divorce. And, as she comes to grips with her own problem, the simple sight of her pounding out her own most intimate problems at an old IBM Selectric typewriter burns into the retina, thanks to the tension in the script, the delicious direction, and an actress’ wit and verve.

I’ll confess here and now that I truly hate to review one-person shows. But, for once, there’s no fear in my mind that I may run out of amazing details to relate. Ms. Siteman draws in the audience in short order, taking quick, jazzy, informal polls on the most intimate of personal details (well, intimate for 1975, when the play is set).

And you can’t keep from smiling as she bounces around the set. A friend of mine who experimented with LSD many years ago said it made sequential images out of the windshield wipers sweeping back and forth across his windshield in the rain and, I imagine, a similar dosage would allow you to see a whole chorus line of gleeful Ann Landerses filling the stage, as Ms. Siteman dances through her performance: jaunty, “just wait till you hear this!” hands framing one little picture after another. For variety, the mood changes when she imperceptibly comes to rest with a stunning letter from a reader, and slowly those big eyeglasses come off, and finally some unstoppable words of wisdom come out like a song.

The premise (other than facing her own divorce) seems to be that she’s working on a book of letters and her responses, which (she jokes) will be titled “My Mailman has a Hernia.” You’d think, somewhere in her mind or spirit or heart, the actress with all the jokes and joy and even drama would have some kind of a hernia, too, from playing this role. But I guess the stress must just bounce right off that helmet-hair, or be frightened off by those sleek, Asian-informed 1970s fashions. Or, by Ann Landers’ own irrepressible moxie. An outstanding achievement.

“Drawn from the life and letters of Ann Landers with the cooperation of (daughter) Margo Howard,” The Lady With All the Answers continues through May 22, 2011, at the black box theater at COCA (the Center of Contemporary Arts), 524 Trinity Ave. The complex is immediately east of the big stone gates in University City, a block east of Big Bend Blvd., and then a block south. The theater entrance is just off the modest rear parking lot. For more information visit the web-site at www.maxandlouie.com.