C.S. Lewis once said friendship is born at that moment when one person says to another, “What! You too? I thought I was the only one.” In the case of Wayne Salomon and Bobby Miller, that moment came roughly 50 years ago at Clayton High School, when Miller walked into freshman orientation. Running the show that day was Salomon, president of the junior class. The two got to talking only to learn they both loved theater, the Beatles and buxom young ladies. “We pretty much became experts at all three,” joked Miller, 63.

“Our high school careers were more or less on the same trajectory,” Miller continued. “Wayne led the way, but we were both president of the (school’s) drama society, we both wrote and directed our senior musicals, and we both liked, and occasionally went out with, some of the same girls.”

Salomon, 65, concurred, explaining, “We both had a lot of leadership roles, though mine were sometimes taken away from me because (clearing his throat) I wasn’t the best student.” 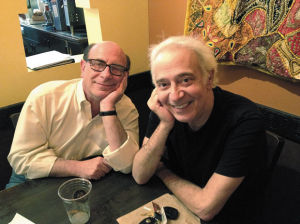 Over a nosh at Kaldi’s in downtown Clayton last week, we chatted about their friendship, families, careers and the intersection of all three. After a 26-year hiatus from working together — nothing intentional, just life getting in the way — Salomon will direct Miller in a new play being staged by Max and Louie Productions Aug. 22 through Sept. 1. But wait, we’re jumping ahead.

After high school, Salomon went on to pursue theater while Miller studied film, though Salomon’s schooling was interrupted by a stint in the Army where he served for 10 months in Vietnam. Eventually, both returned to St. Louis to start their careers, with Salomon teaching, directing and acting and Miller starting a business as a TV and film editor and director.

Then came the fateful phone call from Salomon to Miller in 1975, or was it ’76 (neither could remember). But it came in the wake of Miller being fired from his first big-time-studio directing job.

“Why don’t you come to the train station and do Shakespeare with me?” Salomon recalled asking Miller.

“No, it will be great,” Salomon assured him, even though Miller hadn’t done theater for several years. “I want you to meet Fontaine Syer,” Salomon added. “What the heck is a Fontaine Syer?” replied Miller.

As associate artistic director, Salomon was casting “The Taming of the Shrew” for the newly formed Theatre Project Company. From its inception in the mid-1970s to its dissolution in the early 1990s, TPC was considered the premiere off-Broadway type theater company in St. Louis. For 10 of those years, Miller, Salomon and Syer, who was TPC’s artistic director, worked together acting in, and directing, dozens of plays, including two of which Salomon and Miller are particularly proud: “Waiting for Godot” and “Glengarry Glen Ross”.

Miller, too, learned exactly what the heck a Fontaine Syer is; the two married and later divorced, though they still remain great friends. In fact, Salomon and Miller have served as each other’s best man at all five weddings between them, and they are both godfathers to the other’s first-born son.

“Yes, I retired after two (marriages and divorces),” said Salomon, who has two grown sons and an 18-year-old daughter, as well as an infant granddaughter. “I retired after three,” added Miller, explaining that he is still happily married to his third wife of 15 years. His one son is now 38 and he has a baby granddaughter.

“Someone said we should have married each other,” Salomon joked, pointing to Miller. “I guess that’s cause we do finish each other’s sentences.”

After Theatre Project, Salomon pursued a job teaching speech, debate and drama at John Burroughs School. Miller, meanwhile, went back to documentary film and TV work, eventually winning four Emmys and a Peabody Award. He also found his way back to local theater, and has garnered a half-dozen or so Kevin Kline nominations and a directing win in 2008.

Salomon was no slouch in the productivity department, either. As chair of Burroughs Theater Department for 27 years, he’s mentored the likes of Jon Hamm (“Mad Men”), Sarah Clarke (“24”), Ellie and Carrie Kemper (“The Office“), Heather Goldenhersh (nominated for a Tony in “Doubt“) and budding opera soprano Julia Bullock.

Along with teaching, Salomon has acted at the Muny, the Repertory Theatre of St. Louis, the Black Rep, Off the Cuff, The New Theatre and directed at St. Louis Actor’s Studio. Next month, the Wayne Salomon Theatre in the new Performing Arts Complex at Burroughs will have its grand opening, with Hamm — and of course, Miller — expected to be in attendance.

“Wayne’s the only person in St. Louis who has his name on a building and he didn’t give a dime,” Miller chirped good-naturedly.

But before that big day, another one will arrive for the duo I like to call “SaloMil” when “The Lyons” opens at the COCA Black Box Theater Aug. 22. Written by Nicky Silver, the dark comedy tells the story of curmudgeon Ben Lyons (Miller), who is dying of cancer, and the wacky family assembled at his bedside.

“When (Max and Louie artistic director) Stellie Siteman had me read the script last September, I thought it was brilliant,” said Miller. “I said to Stellie, who I’ve known for years, if I do this, you’ve got to get Wayne Salomon to direct. I knew in order for this to work it needed the right chemistry of actors and director and someone who really understood how to mine the comedy. Wayne was the only director I knew who could achieve that.”

Miller wasn’t sure whether Salomon would bite but convinced him to meet and read the script. He, too, was immediately blown away. “Before we knew it, we had both committed to it, almost a year in advance,” said Miller.