Waiting for Dad to Die: Laughs Pile Up

Oh, they’re just awful people, those Lyons. They’re whiny, denigrating, vicious, self-centered, recriminatory — the sort of blood kin who can’t cling to one another without drawing blood. And they’re a family that you will really, really want to spend time with. Honestly. And not just for (you should excuse the expression) the pleasure of their company.

The Lyons Linda Lavin stars as the suffocating mother of the dysfunctional family that is examined in Nicky Silver’s acerbic comedy.
Sure, from a distance the title characters of “The Lyons“, the Nicky Silver play that opened on Monday night at the Cort Theater in a production starring the fabulous Linda Lavin, are hilarious as they kick the ego out of one another. But look at them close — no, closer — and you’re likely to find an intimate mirror of your own frightened self.

Welcome to Broadway at last, Mr. Silver. And might I add that that this cozy-but-nasty family portrait is just the right vehicle to bring you here?

A prolific creator of dark and defiantly eccentric comedies since the early 1990s (“Raised in Captivity“, “The Food Chain“), Mr. Silver has had productions mounted all over Manhattan, with varying success. But while he contributed to the book of the unfortunate 2002 revival of “The Boys From Syracuse“, his own plays seemed a little too special (read: creepy) for commercial Broadway. 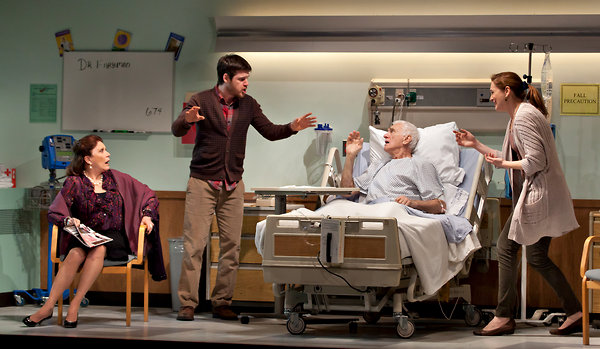 Yet if you stood in the Cort Theater lobby and listened to the laughter that rises in close and regular waves, you could easily pretend that the time was the 1960s, and that you had just dropped in on the latest hit by Neil Simon, directed by Mike Nichols. That’s because the laughter you hear there is cadenced, as if in some sort of call-and-response ritual. It’s the sound of New Yorkers reveling in target-hitting one-liners fired in high exasperation by urban neurotics.

That pretty much describes the comic market that Mr. Simon had cornered for decades, with a type of fast-quipping, point-scoring humor that has since been taken over mostly by television. “The Lyons“, directed with a pulsing comic rhythm by Mark Brokaw, draws laughs with the same reliability as, say, “The Odd Couple“.

But with “The Lyons” there’s often a gasp within the chuckle. Mr. Silver’s characters crack wise not out of loving, familiar irritation but from a forlorn awareness that there’s no lonelier place to be than in the bosom of your own family, even — no, especially — in times of crisis. A shade of existential emptiness and anger hangs over even the jolliest exchange in this play, the first act of which is set in a hospital room, where Ben Lyons (Dick Latessa) is ungraciously dying of cancer, while Rita (Ms. Lavin), his wife, looks forward to life in his absence.

Given that scenario, you might be tempted to think of Mr. Silver as the strange progeny of a coupling between Mr. Simon and Edward Albee. Ooh, not a pretty image. Let’s scratch that. Anyway, such a genealogy doesn’t leave room for Mother, who is usually the matrix of any Silver drama and indisputably is here. And though she’s been played in the past by formidable actresses like Kelly Bishop, Betty Buckley and Jean Smart, the Silver matriarch has never been as fully embodied as she is by Ms. Lavin.

In many ways Rita is a classic of the New York stage: the suffocating, belittling Jewish mother, whose love comes covered in esteem-puncturing quills. But Rita has a surprise or two in her. And by the end, you may wonder if love even enters the equation.

Seated at the deathbed of her rancorous, obscenity-spewing husband (played with wonderful, helpless dudgeon by Mr. Latessa), Rita ladles out sweet-and-sour reassurance. (Ms. Lavin seems to savor every flavor in that mix as she speaks.) “I’m dying, Rita,” Ben says.

Rita answers: “I know, Dear. Try to look on the positive side.”

Enter the children, God bless them. Those would be Curtis (Michael Esper) and Lisa (Kate Jennings Grant), bearing potted plants and heaping doses of blame for the parents they believe destroyed them. These siblings have a case, for sure, since neither the gay, fantasy-spinning Curtis nor the divorced, alcoholic Lisa seems capable of sustaining any kind of healthy relationship. Bickering, sniping and betraying each other’s secrets, Curtis and Lisa are glowering evidence that a death in the family doesn’t automatically bring out the best in people.

It does, however, bring out the best in Mr. Silver. Without sacrificing his mordant wit or bleak worldview, this distinctive dramatist shows a new maturity and empathy in “The Lyons,” especially as it’s been revised for Broadway. The production is tighter, funnier and sadder than it was when I saw it downtown at the Vineyard Theater last fall.

At that time the consensus was that the second act was wobblier than the first. Besides, it had less of Ms. Lavin, whose blithely rendered bitterness seemed the best reason to see the show. But with a few cuts (including a standard-issue Alcoholics Anonymous testimony from Lisa) and tweaks, the second half now equals the first.

In fact, the play delivers a couple of late sucker punches that, while impressive enough in the original version, leave you reeling here. And while Ms. Lavin continues to reign supreme, the cast feels more balanced than it did before. Ms. Grant has securely found her feet as the haplessly competitive Lisa.

And as Curtis, the excellent Mr. Esper (“American Idiot”) now shares the play’s center with Ms. Lavin. Awkward, brainy, ingratiating, hostile and emotionally autistic, Curtis is clearly the product of Ben and Rita’s nature and nurture. (The ambivalent mother-son dynamic between Rita and Curtis feels both clearer and more complex.)

The two second-act scenes in which Curtis self-sabotagingly tries to make contact with others (characters played trenchantly by Gregory Wooddell and Brenda Pressley) are as gripping as Rita’s unexpected 11 o’clock aria of a monologue.

Incidentally, though “The Lyons” begins with Rita’s summoning lush visions of how she might redecorate her living room once Ben is dead, Allen Moyer’s sets are effectively sterile white boxes: a hospital room, an empty apartment. In other words, don’t expect the comforts of home in “The Lyons“.

Home, for Mr. Silver, is only a myth we invent to reassure and torture ourselves. “The Lyons“, which is ultimately not without an endearing gleam of hope, suggests that once you accept that chilly reality, you just might be able to make a life for yourself.