Let me just start off by saying, there is some interesting pre-show chatter that goes on sometimes. “My cousin’s uncle got him out of jail”. “Yeah, and the prosecuting attorney was my aunt’s brother-in-law”. This was the kind of small talk going on before Max & Louie’s opening night performance of Stephen Dolginoff’s THRILL ME: THE LEOPOLD AND LOEB STORY. This musical is based on the true story of Nathan Leopold and Richard Loeb, “thrill killers” who were sentenced to life plus 99 years for the murder of a young boy. With songs like “Nothing Like a Fire”, “Way Too Far” and “Ransom Note”, the dark nature of this “crime of the century” seems unlikely material for a musical, but as director Brooke Edwards points out in her notes, this show concentrates less on the crimes and more on the relationship between these two young well-to-do law students from Chicago.

The story opens at Nathan Leopold’s fifth parole hearing in 1958, and the story unfolds in a series of flashbacks. Once the story shifts back to 1924, and we see these two childhood friends meet up, it’s obvious that while Nathan is obsessed with Richard, Richard is obsessed with petty crimes for kicks. Richard’s penchant for Nietzsche heightens his need to prove that he and Nathan are “Supermen” — above society and too clever for the law. Arson and burglary soon give way to aspirations of committing the superior crime of murder, and Nathan, hopelessly smitten, seems willing to do just about anything Richard wants. A contract between the two is typed up, and in exchange for Richard’s scraps of affection, Nathan agrees to be his accomplice. The rest of the play documents their attempt to commit the perfect crime along with some twists along the way.

This hour and a half show sucks you in with admirably credible performances by its two leads. This show wouldn’t work without chemistry between them, but James Bleeker (Nathan Leopold) and Blake Berry Davy (Richard Loeb) have it, along with solid voices. Under Brooke Edwards’ shrewd direction, Bleeker and Davy characterize the needy Nathan Leopold and the calculating Richard Loeb completely. I was particularly impressed with the way Bleeker’s Nathan Leopold appeared so young and impressionable in the flashbacks, but more wearied and wise in the scenes of his parole board hearing. 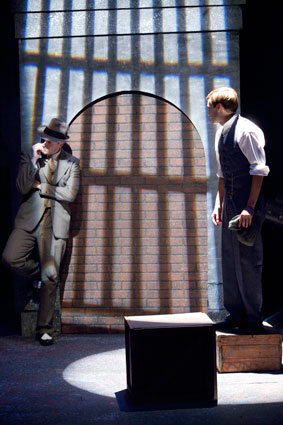 The songs are eerie but alluring with accompaniment by a wonderful Henry Palkes at the piano. The costumes by Cynthia Lohrmann are perfect, and the scenic design by Will James Stacey is simple but effective and works well to accentuate John Blunk’s potent lighting. You know I love me some “in your face” theatre, and the intimate stage of the Gaslight adds to the power of this musical. The piano on occasion was a little overpowering, but that’s a minor quibble in light of the rest of this well done production.

This show provides an intriguing look at domination, seduction, betrayal and how far people are willing to go in the name of love. Or at least pliant infatuation. It’s worth checking out.